Well, you already know the end of this story.  I ended up surprising myself and running 50 miles in my first ultra marathon.  My goal was to run 50k (or 31 miles), so it was a real shocker to end up doing 50 miles!!

It was an absolutely awesome experience, and I will definitely do it again.  Especially this one.  It was 15 minutes from my house!! 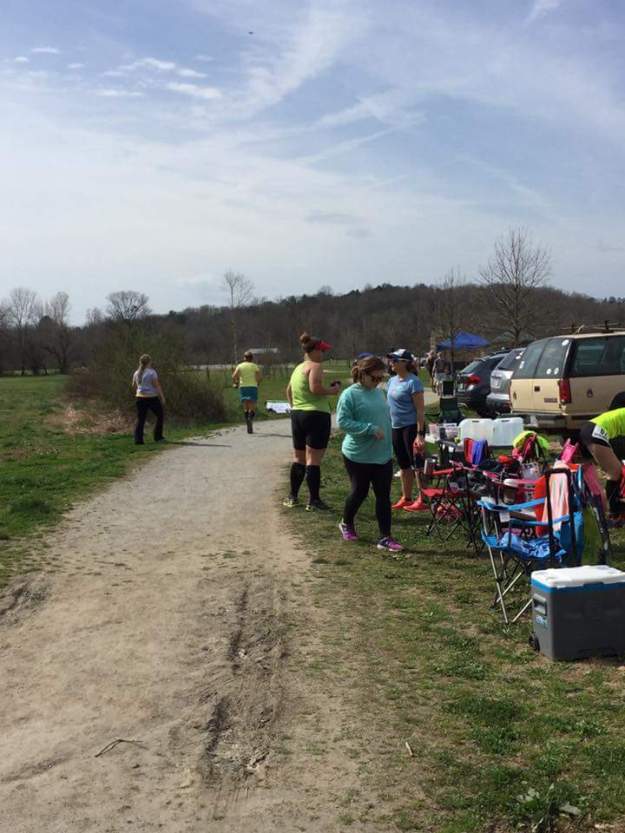 The trail.  It was close to parking, so we could all set up our own stations right out the back of our cars

First, a bit of the particulars:  The 12 hour event was held in a park that had a .75 mile hard packed sand track loop.  To make each lap a full mile, there was a .25 out/back trip to a bridge added on.  There were 54 participants who ran the gamut in age (20-69) and fitness levels.  30 of the participants were female (two of whom were 67 years old and one who was 68!!!).  The one mile laps were counted by volunteers, who tracked a set number of runners all 12 hours long!

The ‘to the bridge’ portion of the loop

Let me tell you, this was one of the most inspirational events I’ve ever witnessed/participated in.  (Boston Marathon being the other one).  This was not like a regular race.  While regular races really are fun, they are competitive (which don’t get me wrong, I like!) vs. cooperative.  Everyone at this event was so supportive of everyone else.  In the course of the twelve hours, we all got to know/run with many of the other runners.  These are people who  never would have met each other in our everyday lives. And here we were, running with and encouraging each other for hours!! As you can image, we’re all now best friends forever on Facebook!

Since the event was in “our territory”, 10 of the runners were from the same run group. Many of us already knew each other. And the ones who didn’t know each other at the start did by the end! Also, since we were so close to home, many more runners from our run group stopped by to cheer or run with us!

Steve and I ran the event, and ran together for the first 28 miles.  My best running friend Maria (in the tigger capris) showed up to run a bit with us!

Runners and supporters from our run group!

All that support made this event super!
As I already said, my goal was initially to do 31 miles. But, once I reached that goal, I felt like I could keep going. My next goal was 40 miles.

A friend showed up at mile 38 and told me I was doing 50. Another one of the runners started saying that too. I wasn’t interested, but kept on running. By mile 43, I agreed to 50!  And by the time I committed, I just barely had enough time to finish.  I completed 50 with 8 minutes to spare!

My friend ran with me….or i should say ran/walked all 12 of those last miles! She was my cheerleader and encourager. Without her, it truly wouldn’t have happened!

There is so much more I have to say about this race. But I think I’ll save it for another post. In parting, I want to say, that when it was over, I took a shower.