This past weekend I joined up with some new friends to run a 24 hour relay race in Jefferson GA.

There were 8 of us on the team. 4 women and 4 men.  The course was a 10k “loop” through woods, over a meadow, and around parts of a lake. Each one of us ran the loop, one after the other. The goal was to get as many loops as possible.

As you can see, there were MANY twists and turns on the course. And as you can imagine it was really hot. The heat Index rose to 97 by midday! We started the race at 10 am. Luckily, there was still a bit of cloud cover. And it was ‘only’ in the low 80s. Our first man finished in 55 minutes. Next was my turn (I think they let me go next out of pity….I was by far the oldest on our team!)

The course was up and down a lot, and it was a bit confusing trying to follow the trail. But I finished fine, without missing any turns, and felt pretty good about my 65 minute time.

The next 7 hours were spent refueling 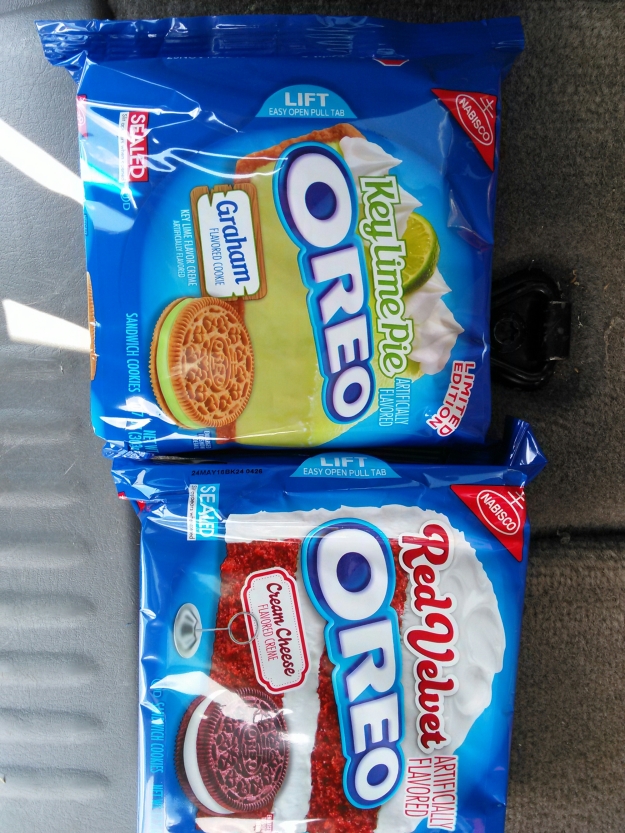 Cookie review: everyone enjoyed both flavors! I’d been eager to try each one, but knew better than to buy a pack of either one for myself. I wouldn’t be able to stop myself from eating every single one! But the race seemed like an awesome time to try them…lots of calorie burning plus sharing!

The rest of my team ran their laps in pure Georgia heat and humidity. It truly was brutal. I am surprised that only one race participant went down (from another team).

My next lap was at sunset. Still hot, but not as bad as what my teammates had faced. Finished that one in 67 minutes.

It was 9:15ish by the time I finished. I hopped in my car and went home for a shower and nap. Was back on the road at 3 am. Crazy??

My final lap was in pitch black. I had on a headlamp. And carried a flashlight in my hand. Both were needed. The flashlight picked out the stumps, and roots, and ruts, while the headlamp lit my path. It was kind of scary.

One of my teammates reported hearing a deer snort. It literally scared the pee out of her!

I really had to slow down and concentrate hard not to miss the trail markers in the dark. It took me 75 minutes, but I’m proud to say I didn’t get lost or fall down, or walk, or miss any of the turns!

My family all laughed at me when I told them I pretended to be a native American warrior on my first test of manhood. But hey, I guess I passed even if I don’t fit any of the characteristics!

Although I didn’t race this weekend (legs still a bit sore from last weekend’s ultra), we still went to breakfast at one of our favorite post race places…The Rexall Grill.  As the name implies, it’s nothing fancy!  But boy do we love it. 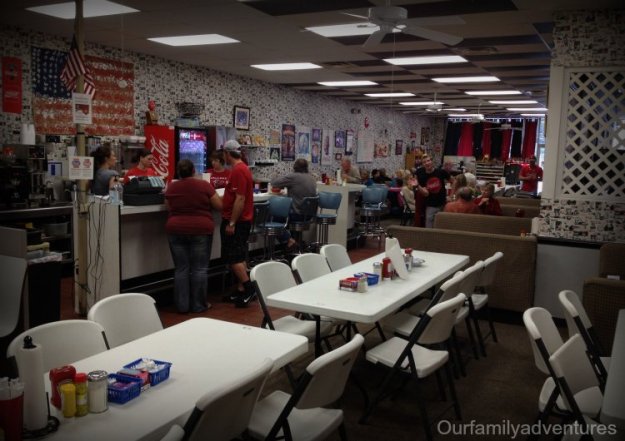 And as you can see from this photo, it truly isn’t fancy!

Since we didn’t race this weekend, we got there earlier than our normal time.  We encountered a scene that really touched me.  But before I describe scene, I think I should give you a bit of background to understand why I was moved.

When I was growing up, we moved around. A LOT.  I went to a different school every year until 8th grade.  (I did get to stay in place to graduate high school…which was such a blessing!)  The moving around was a bit hard b/c once I got settled, and made new friends, off we’d go again.  I vowed that when I was grown up, I’d provide my children with the stability I didn’t have.

And I’ve been able to keep that vow!  We’ve lived in the same community since 1989!!  Although we’ve had different houses, my kids have been in the same school district since their births!

So anyway, back to the scene at the Rexall Grill.  The two tables in the foreground of the above pic were pushed together, and there were a bunch of REALLY OLD  men sitting there.  I formed a theory that they were friends since high school. The theory was confirmed when I overheard one of them telling the waitress that they had been football teammates!

There were also some ‘young’ men (in their 50’s) sitting with these older gentlemen.  Clearly, their sons.

How awesome is that scene?  What could be better than having the same friends for your entire life? And having your sons there too?  Sorry if I get a bit weepy just thinking about it!

And in case you are wondering what kind of food they have at the Rexall Grill, here is  another pic that shows what I always get…minus the grits/gravy in the left of the picture.  Grits are a Southern ‘delicacy’ that I’ve never acquired a taste for.  (even though I’ve lived in the South for most of my life now!) 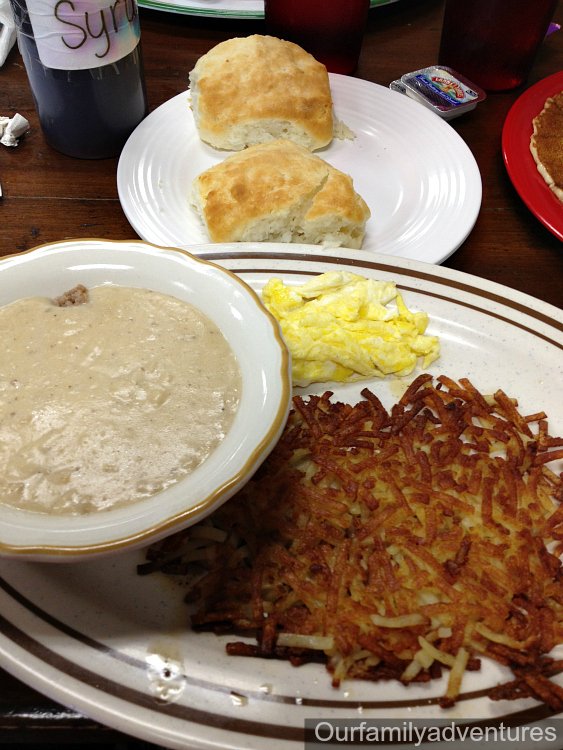 OK, so first things first…I’ve learned the hard way that a half pound of raw carrots the night before a race is not  good pre-race fuel.  Sheesh!!  Good thing the race didn’t start until 10!

So this was my first race in 2016.   I’ve made this race an annual event for the past four years b/c it falls on or around my birthday.  And really what better way to celebrate than to run a race?

It is local 5k, on a course that is VERY difficult.  It is an out and back loop.  First mile, all down hill, second all flat, third all uphill.  This is not a PR course, but I enjoy it because it is close to my house, and I always see a lot of running friends there.

Some of my best running buddies didn’t show up this year, but I brought an old friend who is new to running.  It was awesome to share the experience with her! 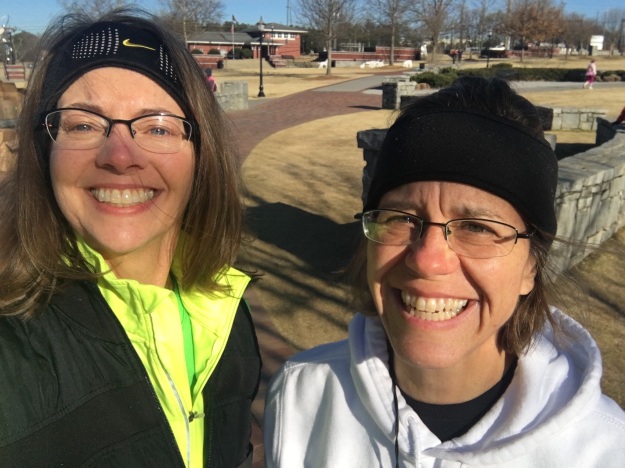 It was COLD this year, but not so bad once the race started.

One of my biggest thrills is to see/greet all the people I know.  I saw our high school cross country team…they were running in the opposite direction on a training run.  ‘Go Mrs R.’. So that was fun.  I also saw some cross country moms who braved the cold to race too! Awesome!  And a friend who ran Boston last year when I did (we actually found each other at the start in Boston!).

The very best part of this race for me was when I was coming up the awful uphill finish.  A man in front of me was struggling.  He’d walk, I’d pass him, then he’d run and pass me…At one point, I was passing him again.  As I ran by, I motioned with my arms to ‘come on’.  To my surprise, he did!  We reached the single flat part in the uphill finish, I knew to surge here, b/c the .1 to the finish line was uphill.  He didn’t surge, but he didn’t walk either.  He finished about 5 seconds behind me.  Later, after we’d caught our breaths, he came over and thanked/hugged me for the encouragement.  That made my day!

The really good ending to this story is that he won his age group!!

Today I am trying a link up for the Weekly Wrap hosted by Holly @ HoHoRuns and Tricia @ MissSippiPiddlin.   See rules here. Thank you ladies!

Once I started running, I began to start paying more attention to the foods I ate.

For the past six years, I’ve been on a steady path of improving, but still have certain guilty pleasures that I’m not willing to give up.

Things I’ve Been Able to Give Up 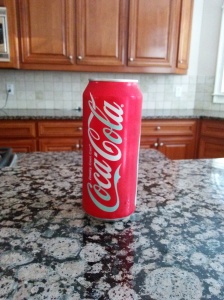 I NEVER would have thought I could do this one!!  And truly it has been the hardest habit to kick. I couldn’t stop cold turkey, so first I reduced it from seven Cokes a week to 3.  Then, like a heroin  addict  using methadone to ease off, I switched to a few Sprites a week.  Since I don’t like Sprite as much, it’s been easier to wean myself from that.  I also replaced my morning Coke with Unsweet Ice Tea.

Wine:  I really never had any intention of quitting wine.  It just kind of happened, and I feel SO much better without it!  Since I switched over to really early morning running, I noticed that it was much easier to get up and go if I hadn’t drank any wine the night before.  So I just stopped.  Strange!

With these 2 changes, I lost about 5 pounds!!  And I didn’t even try.  I’m now the skinniest person in my house…which isn’t necessarily a good thing, b/c in the classic ‘Even Steven’ principle (from a Seinfeld episode where if someone loses weight, another nearby person will gain it), my daughter is gaining.  (She’s a sidelined cross country girl still fueling like an active cross country girl).

Advil:  Not necessarily I diet change, but something that I enjoyed that I probably overused.  When I first started running, they really helped with muscle pain.  I’d take anywhere from 4 a day everyday down to 2 a day 3-4 times a week.  About 2 weeks ago, I just stopped (wasn’t supposed to have any before the small surgery that I recently had), and noticed how much better my tummy felt.  After having dealt with a chronic upset tummy for years, this is nothing short of miraculous!!

Things I haven’t Been Able to Give Up (Yet)

Goldfish:  I literally eat handfuls of these EVERY SINGLE DAY.  I guess maybe they are fulfilling some dietary need for carbs and salt?  Or maybe not.  When I’m feeling really fancy, I mix two flavors together.  But my go to favorite is pretzel.

Mixture of Parmesan and pretzel goldfish

Candy:  Sorry, just can’t quit.  I always have to have a bag of candy in the house that I’m working on.  I have pretty good self control, so it will take me a while to work through a bag.

I think I’m pretty tricky on Halloween though.  I buy candy that I don’t like to give out! (I’ll bet I’m the only person on the planet with that strategy). 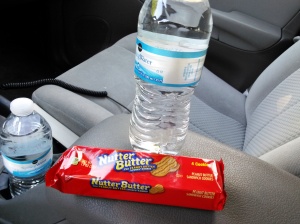 What have you been able to quit?

What are your guilty pleasures?